The purpose of this information is to spread the word about how easy it is to make your classic fun to drive. We are all accustomed to the way modern cars handle. Even mini-vans have rack and pinion steering, why is that is not true of your vintage car? And why is it that when you slide behind the wheel of a classic Corvette, Mustang, or Camaro – with factory stock suspension and steering – it feels so clunky and hard to drive? The car looks great but it is not fun to drive.

At SpeedDirect we believe that is just wrong!  A classic should drive as good as it looks. So we have set out to design, test and, manufacture products that update a classic to be a joy to drive. This blog will provide both basic and advanced knowledge to allow you to first, understand why your car feels clunky, then, make an informed decision as to what to do to correct the problem.  In the process, we hope you enjoy learning more about your car, yourself and a fabulous opportunity to smile until your face hurts out on the open road! Always remember you do not have to settle for a beast when a little tweaking will tame it and allow you to master the monster.

At SpeedDirect we are drivers and owners of classics that handle and feel like a modern car. There is no reason you can’t join the ranks of fun-loving drivers too. 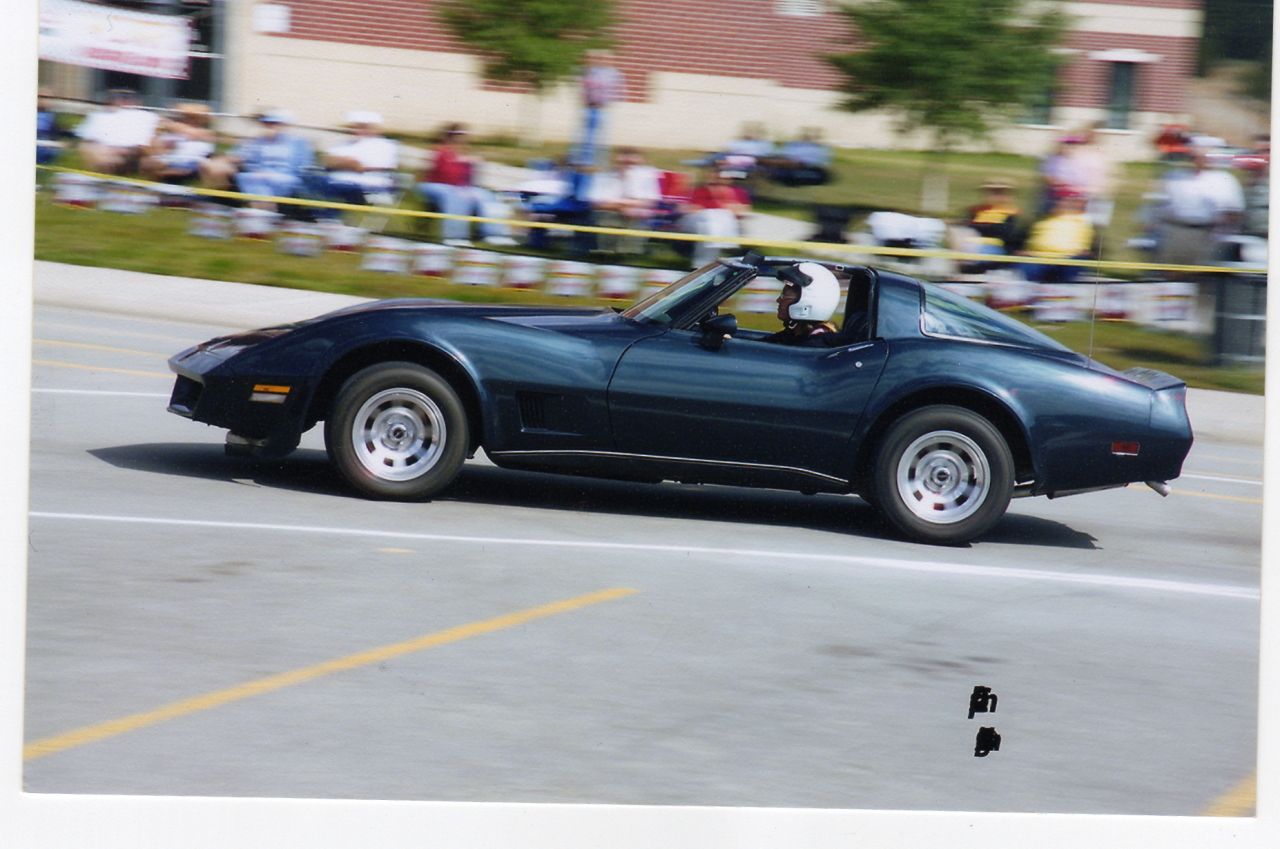 Alignment & How it Affects Handling

Body Roll – To Lean or Not to Lean

What Spreader Bars Do

Lowering By Cutting a Coil

The Essentials of Steering Response

Why Consider a Stage Kit? 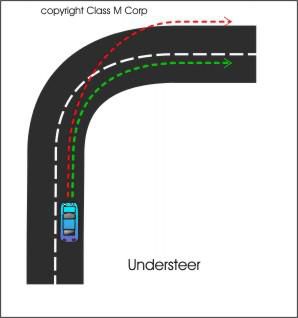 All of us have opinions on how our cars handle. It can be difficult some times to express what our car is or isn’t doing when describing a problem we are struggling with. This article will address the basic handling trouble spots so you can easily identify what your car is doing and some general guidelines on what you could do to possibly correct the trouble.

Under Steer: Entering a corner our car can exhibit several tendencies, the most common is understeer. It is that sickening feeling you get when you rack your car into a turn and the front wheels slide or “push” instead of following the turn path you had in mind. Most factory cars are set up by design to understeer. It is a compromise that engineers and lawyers came up with so you won't “hurt yourself”, and it is very prevalent in classic cars. The diagram shows what is happening. The radius of turn which the car can accommodate considering available traction & speed is greater than the radius of the road or track corner.

Symptom: You turn the wheel but the car wants to go straight as the tires scrub along the paving.

Oversteer: Just as you would imagine oversteer is the opposite of understeer. It can be tricky to manage using driving technique since the rear end of the car wants to swing out forcing the driver to take quick action. Those actions are usually to turn in the direction of the skid, reduce the throttle but not completely off, or the slight application of brakes to avert a complete spin. These actions are a learned response and take practice to balance the forces so the car stays in control.

Symptom – You turn and the front end has greater traction than the rear and the rear end swings out in the direction of the corner.

Neutral Steer: Just like Goldie Locks, we are looking for steering feel that is “just right”. A car set up for neutral steer will be the quickest through a corner. It will follow where you point it which presumably is where you want it. It is an elusive setup since there are many variables not the least of which is speed. At higher speeds, your vehicle aerodynamics starts to play a bigger roll in steering response. A car can go from understeer to neutral to oversteer just with changing the speed but as a general rule, the neutral steer set up is the most desirable because it is the most predictable.

Symptom – Great feel and command of the direction the car is pointing at any given instant.

Now the next time you are trying to explain what your car is doing, or not doing in a corner you will have a vocabulary that will allow you to explain it terms which someone skilled in the art of chassis setup can advise you.

What is the Circle of Traction?

Cornering Concepts: Circle of Traction
The Circle of Traction is a concept which chassis engineers use to determine how the available traction of the tires is being used. This is because there is only so much traction any given set of tires is capable of producing and it is distributed between cornering, braking, and acceleration. Using this concept, it is possible to determine how much traction is left for cornering once the forces of braking or acceleration are accounted for.

What Does it Mean?

An example of this is a car that is equally balanced and each tire has 750 lbs of load on them and the cornering efficiency is 100%. There is up to 750 lbs of traction per tire in every direction the driver turns, accelerates, or brakes. Combine the maneuvers and there is less traction in other directions as shown by the dashed lines in the figure. The combined forces are subtractive. In the extreme case of either spinning the rear tires in acceleration or locking the brakes in hard braking, there is no traction left for turning left or right. The car will either slide or the rear end will sway back and forth since there is no traction remaining to counter side forces.

A car is subject to acceleration. If it is parked and at rest, the force acting on its mass is the force of gravity through the vehicle's center of gravity and the center of the earth with the car being attracted to the earth and the tires “pushing” on the earth and the earth “pushing” back with the same force. This is commonly called 1 g of acceleration, normal (90 degrees) to the earth’s surface. It is said that the car “weighs” 2000 lbs for example due to the G-force (gravity) acting on the car. When the same car is in motion and turning a lateral acceleration force is developed. The force of gravity is still acting on the car but now the second cornering force becomes important and it is referenced to the earth’s acceleration for convenience so we call it g or lateral g stated in a fraction of or multiple gases in “My car is capable of .9g.”, meaning the lateral or side force when cornering is approaching 1 g of normal earth acceleration (gravity). This allows comparisons to be made as modifications are done to improve cornering lateral force. 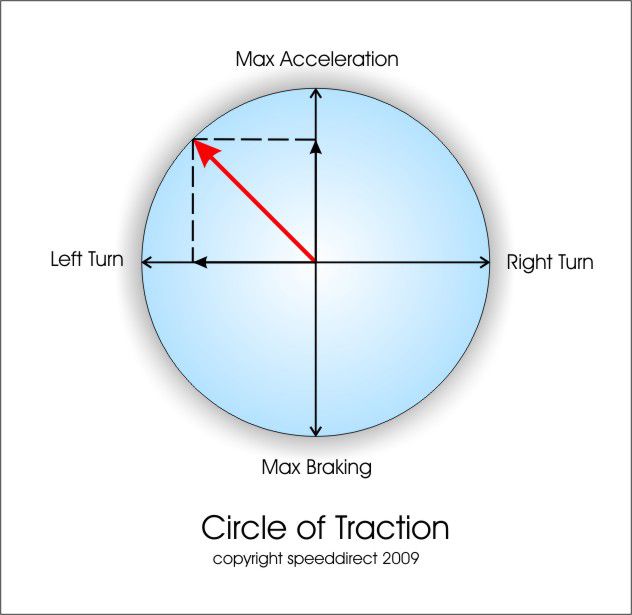 To Skid or Not to Skid?

The common method of determining lateral G-force is to use a “skid pad”. This is a circle marked on a section of the pavement of a known radius. The car is driven around the circle as fast a possible and timed to determine how much force is being developed. It is a very common test for both street cars and race cars and manufacturers usually publish the numbers as a reference to how well their design performed. It is a significant factor in how well a car will corner. The higher the g number the better the car is at cornering. 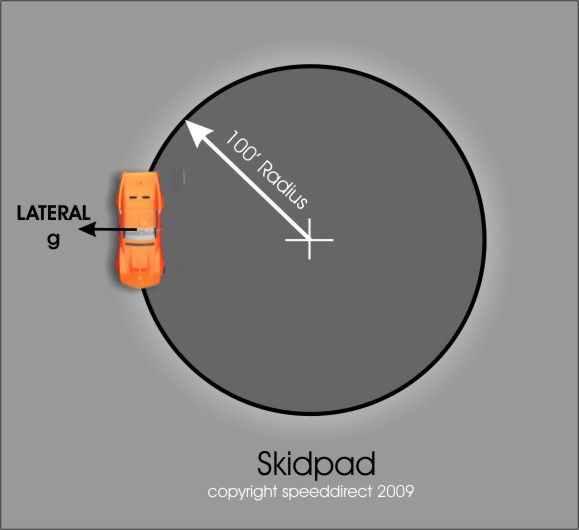 The most basic way of arriving at this number if you don’t have a g computer is to hand calculate the number. The formula is as follows:

R = Radius of the skid pad in feet.

Let’s look at an example:

You time your car as you make one 360 degree lap around the skid pad as fast as possible and it takes 13 sec. The skid pad has a 100 foot radius.

This g is equal to 72% of the normal earth gravity pushing laterally, sideways. As you make modifications to the car you repeat the process which gives you the ability to see by measurement what improvement has been achieved.

It is possible to improve the g your car is capable of developing. As mentioned earlier, the contact patch of the tire is a key element. To keep the patch maximized SpeedDirect offers a number of solutions from individual parts like upper control arms which greatly improve the suspension geometry or complete handling packages or stage kits which include a tuned assemblage of sway bars, shocks, and spring rates to vastly improve traction and lateral grip over a stock suspension. 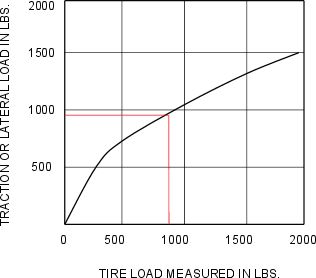 The concept of weight distribution is important in how well a car handles in turns and under braking. It is easy to add spring rate, sway bars and adjust the ride height without considering the overall impact on the car's ability to stick to the road or track. Let’s see what can be done to methodically improving car cornering performances.

Weight distribution is defined as how much force in the form of weight is present on each tire. It can be static but also is impacted by motion which dynamically alters the forces. This change is called weight transfer which occurs rapidly as the vehicle is maneuvered in turns or during braking or a combination of both. Understanding these forces allows the car to be configured or set up for maximum traction.

The biggest impact of traction is vehicle weight. It may seem to be the opposite of what should happen but by looking at a sample tire performance curve we see that as the load increases traction increases in a non-linear manner.

Lets look at several conditions to see how available traction is affected. First we will examine a car at rest with no side to side bias or weight transfer. 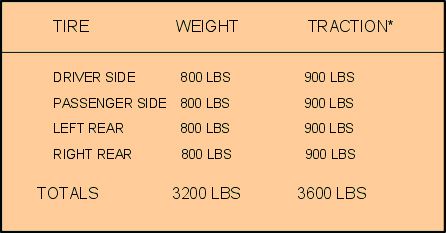 In this example we can determine what the magnitude of cornering force we should be able to generate using the sample numbers not taking in to account weight transfer.

Now we need to see what happens when dynamic forces are considered.

The reduction in available traction is proportional to the weight transfer. This is fine for a car with a 50% weight distribution but what about one with a 60% front, 40% rear?

What happens with unequal weight distribution is that the front tires have a lower potential to create cornering force “g” due to higher weight. When this happens the front end tends to under steer (more steering input than normal) in a corner since there is less available traction to corner than the rear tires. 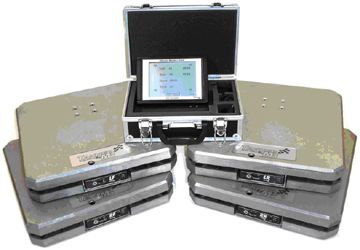 The essential tool in developing a plan to adjust and balance the car is a good set of race car scales which range in price from ~$700 on up. With this tool you will be able to measure the weight of each wheel independently and begin the process of setting up the car to improve handling.

The weight transferred to the side of the outside tires on a turn can be calculated by knowing the center of gravity, vehicle weight, and track. This is illustrated below. 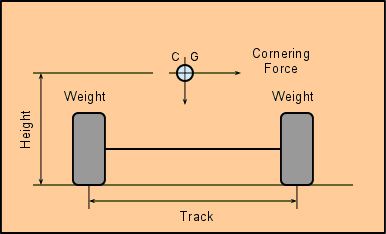 The standard method to adjust is changing the spring force. This can be accomplished several ways.

There is a lot that can be done before testing the car in real conditions & loads. Weighing the car, correcting the imbalance as much as possible, and fine-tuning with the methods described will get a close approximation of the initial setup. The final test is driving and making adjustments as you see what the change did for handling. An essential tool to have is a lateral g meter. This can be inexpensive as an app for your smartphone or as elaborate as a dedicated recording system costing a thousand dollars or more. It is highly suggested that you keep records of all your changes and results so you can choose the setup that worked best.